You are here: Home / gardening / back step salad 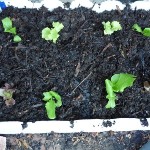 I used an old polystyrene fruit box and planted eight lettuce seedlings in home made compost. A day after I planted them the blackbirds had nearly scratched them all out in their enthusiasm to find some of the many worms. Four short bamboo canes with some mesh stretched across has solved the problem.

I also sowed some spinach and radish seeds in two 8.5 litre flower pots. Five pots ($10), five packets of seeds ($15) and a 40 litre bag of potting mix ($10) could give you rocket, spinach, lettuce, spring onions and radishes on your back step.

I chose this spot because it’s close to the house and gets morning sun but won’t fry the seedlings in the afternoon. If it gets too shady later in the year, I can move the pots somewhere else. It’s also close to a tap so I can fill up my watering can.

If you found this useful, then sign up for the fresh food garden course on Saturday 17th or Saturday 31st January 2009.