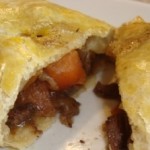 A slow-cooked stew can be even better in a pasty. It’s easier to take to work for lunch in pasty form too. You could use ready-made puff pastry. I made some rough puff pastry. I made four pasties but they seemed a bit big for my taste and I think six or eight smaller ones would be better.

500g left over stew, chopped up small and with most of the juice removed.
300g high grade flour
150g butter, softened and cut into cubes
150 ml cold water

Sieve the flour into a mixing bowl. Sprinkle the cubes of butter into the bowl and toss them around until they’re coated in flour. Add enough water to bring the dough together into a ball. Dust the work surface with flour and shape the pastry into a rectangle. Roll it out until it’s about A4 size with the short edge towards you.  Fold into thirds like a letter. Give it a quarter turn and roll out to A4 size and fold three more times. Wrap in cling film and chill for an hour in the fridge.  Roll out between a sheet of baking paper and a sheet of cling film*. Cut out four 20cm circles (or six 15cm circles). Divide the stew between the pastry circles. Moisten the edge of each circle with water and fold the pastry over the stew. Press down well at the edges to seal in the mixture. Beat an egg and brush over the pasties to glaze. Bake at 190 degrees C for half an hour. Allow to rest for five minutes if eating them straight away, otherwise they’re great cold for a picnic.

* this means you won’t need to add extra flour.