You are here: Home / recipes / baking / carrot and coconut cake 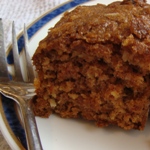 I made a gluten and dairy-free carrot cake by substituting a gluten-free baking mix for the wheat flour in this recipe. I think you’d be hard pressed to tell the difference. It’s a rich, dense, moist cake with the fat coming from oil and coconut instead of butter.

Pre-heat the oven to 180 degrees C. Sift the flour, spices and baking soda into a large mixing bowl. Add the sugar, coconut and sultanas. Break the eggs into another bowl. Add the oil and vanilla essence. Mix in the grated carrot. Pour the wet ingredients into the dry ones and mix gently to combine. Pour into a 23cm square tin lined with baking paper (I use a silicon mould). Bake for about an hour.

zucchini and corn self-crusting quiche
rhubarb and almond jalousie
sweet chestnut and chocolate cake
salmon, kumara and herb fishcakes
« So you think you know how to sow?
brassica barriers »
Logging In...