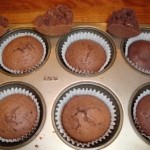 I’ve tried three alternative cocoa varieties after being disappointed by the offerings from both Cadbury and Nestle in the supermarket. Left to right:

I discovered afterwards that ‘dutched’ cocoa has a different pH to other cocoa and consequently you need to adjust the raising agent in your cakes. Next on the list to try is Equagold (available online from Zealand Foods), although apparently Homebrand cocoa from Woolworths is very good for the price.

Now Cadbury is messing about with the formula for its chocolate to reduce costs and stealthily reducing the size of its blocks. You knew you should have been buying Whittaker’s instead. In a blind tasting of 70% cocoa solid chocolate by three experts (me and two friends), Whittaker’s came second in front of seven other chocolates, including premium and International brands. It was just beaten by another delectable Kiwi chocolate, Bennetts of Mangawhai.