You are here: Home / newsletter / cooking is a game you can eat 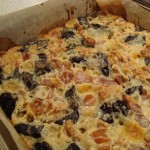 It takes a certain special sort of friend to know that when you say ‘bah, humbug, I don’t need another recipe book, there are plenty of recipes in the world, I don’t use all the ones I’ve got’ what you really mean is ‘I love recipe books most amongst all books, I have many and I refer to them daily (if not more frequently), I don’t feel I can justify any more so I’ll pretend I don’t want any but secretly I yearn for every new, shiny one that appears on the bookshops’ shelves’.  I’m particularly fortunate to have two of that sort of friends. They bought me ‘A Treasury of New Zealand Baking‘. An anthology of recipes edited by Lauraine Jacobs. Each recipe is accompanied by a full-page photograph. All royalties go to the breast cancer foundation.

New Zealand baking is characterised by lots of brown sugar, copious quantities of butter and the frequent inclusion of condensed milk. Not surprising then that it tastes so good. Just like a compilation album, this book introduced new recipe writers to me. The first two recipes I chose to try were both contributed by Tina Duncan, with whom I wasn’t familiar. I was prompted to try the ‘dark ale fruit cake‘ by the bottle of Guinness languishing in the fridge-door, left by a dinner guest. The fruit cake is a big one that demands a large mixing bowl. I resorted to a salad bowl. It also calls for a large, square, cake tin. Mine was 23cm square, not the prescribed 25cm. The mixture barely clung to the edge of the tin by its meniscus. Crusty cake trimmings anyone?

My recent batch of bread-maker brioche buns was also inspired by the kind gift from a friend of brioche moulds.

P.S. If you were the friend who left us the bottle of Guinness, I owe you a slice of fruit cake.