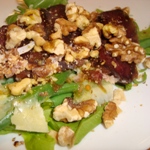 After my success with smoking salmon I decided to try curing a fillet of venison to produce the venison equivalent of proscuitto. It turned out very well and tasted delicious – salty, chewy and meaty, just the way it should. I served thin slices on a bed of salad, green beans and parmesan topped with toasted walnuts, a squeeze of lemon juice and a drizzle of olive oil. A grind of black pepper but no salt required.

You need to plan ahead but when it’s done you can use it on salads, in sandwiches, on a pizza or in a pasta sauce. Anywhere you’d use ham.

1kg fillet of venison or beef trimmed of fat and skin
One cup sea salt
Half a cup raw sugar
5 tablespoons black peppercorns, crushed in a pestle and mortar
2 tablespoons brandy

Mix together the salt, sugar, peppercorns and brandy to make your curing salt. Choose a shallow non-metallic dish in which your meat will fit snugly. Spread a layer of the curing salt in the base of the dish. Place the meat on top and cover with the remainder of the curing salt so that the surface is completely covered. Seal tightly with cling film. Place in the fridge for 48 hours, turning the fillet every 12 hours. Remove the meat, discard the juice and and curing mix. Rinse the fillet and pat dry with paper towels. Slice thinly.