You are here: Home / recipes / easy rhubarb and ginger jam 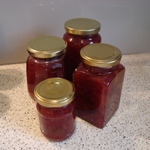 I was sceptical about getting rhubarb jam to set as it’s not naturally high in pectin. I experimented with using a packet of jam setting mix (about $2) which contains pectin, added to ordinary white sugar. It made a quick and reasonably well set jam. The resulting jam was quite sweet but a beautiful pink and not too mushy. It doesn’t have to boil long so it yields about eight medium sized jars. It’s important that jars, lids and any associated bottling equipment (spoons, jugs and funnels) are sterilised properly – place in an oven at 100 degrees C for ten minutes, put in a pan of water and simmer for 10 minutes or wash in a dishwasher at a high temperature setting. Use tongs to handle them while hot.

Juice of one lemon

Put the rhubarb in a large, heavy bottomed pan and heat gently, stirring continuously until the juice starts to run. Once the rhubarb has softened, add the sugar and continue to stir over a medium heat until it dissolves completely in the juice of the rhubarb. Add the ginger, lemon juice and setting mix. Stir well and bring to the boil. Boil for ten minutes. Remove from the heat and allow to cool slightly. Put into jars whilst jam and jars are still warm. Seal tightly. Don’t try to label before they cool or the labels will peel off.

cucumber and lettuce soup
Hawke's Bay winter pesto
green string pudding
bramble jam
« zucchini and corn self-crusting quiche
got beans? get one of these… »
Logging In...