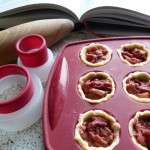 Mince pies get a bit repetitive particularly if you’re not partial to dried fruit. These are a great alternative and mine definitely look home made. Made 18 mini pies. Serve with cream, custard or vanilla icecream, possibly all three.

Shortcrust pastry made from 6oz high grade flour and 3oz butter plus a little cold water to bind (pastry only works in imperial measures).

Roll the pastry thinly and cut out rounds for the base and lids of mini pies (an equal quantity of tops and bottoms works best). Press the bases into the tins (or in this case silicon moulds) and fill about two thirds full with rhubarb mixture. I filled mine a bit full and the tops popped off but without too much bubbling over as the rhubarb was quite dry. Moisten the edges of the lids and seal on top of the pies, pierce with a sharp knife to allow steam to escape. Bake at 200 degrees C for 35-40 minutes until golden on top. Allow to cool slightly before removing to a cooling rack. Dust with icing sugar to serve.