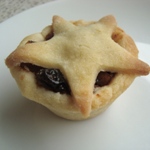 I’m still refining my mince pie recipe since making slow-cooked Christmas mincemeat and favouring mini pies over large. Silicon bakeware takes the stress out of removing them from the tin, washes in the dishwasher and doesn’t need greasing – hooray. I used made this sweet, short pastry for one batch and it worked well. I like the fact each pie has its own home-made individuality. My star cutter is a bit big so the stars droop over the edge slightly but no one seems to mind.

Norah, the explorer hen, has now hatched six chicks. If you are interested in giving them a home they are for sale here.

The 2011 Kiwi Diary is a beautifully formatted publication. For those of us who still cling to our ever effective paper-based systems it’s a thing of beauty to own and use. Delight someone you love with one in their Christmas stocking.

half a cup of icing sugar

Whizz the ingredients in a food processor until they form a ball of dough. I needed to add a tablespoon of water for this to happen. Divide the mixture into quarters. Divide three of the quarters into five pieces and roll each into a ball. Press into fifteen mini muffin tins. Put in the fridge for half an hour or so. Pre-heat the oven to 180 degrees C. Roll out the remaining quarter of dough between sheets of baking paper. Cut out stars, rerolling the scraps to make 15. Put a teaspoon of mincemeat in each pastry case and top with a star of pastry. Bake for 20-25 minutes until golden.