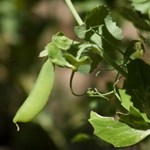 Peas need temperatures of at least 10 degrees C to germinate.  There are lots of different varieties to try – tall and dwarf, snow peas and sugar snaps (round like a shelling-pea but with tender, edible pods).

Here are some tips for success with peas. If you want more help and advice with vegetable garden, come on the fresh food garden course.

1. Get rid of pests before you start

Mice can smell a pea from miles around so set some traps, baited with peanut butter, before you sow the seeds. Mice tend to run along the edge of a wall rather than out in the open so strategic placement of your traps is helpful. A plank angled over the top makes a tunnel for the mouse to run through and stops birds getting accidentaly caught in the trap. Get rid of as many slugs and snails too – ducks, beer traps, moonlight collecting sessions all help reduce the numbers.

2. Give them a head start

Peas don’t like having their roots disturbed by transplanting their seedlings out of pots into the ground. However starting them in pots makes it easier to keep them watered, away from slugs and snails, and you could start them inside (or in a greenhouse) where it’s warmer. I use one meter lengths of guttering, filled with potting mix. I sow 20 seeds – two rows of ten seeds, off set. When they’re about 10cm high I dig a trench in the soil the same length and shape as the guttering and slide the seedlings in. You can start them off outside instead if you keep off the birds and keep them moist.

Peas grow tall (up to about 2 metres high). Even ‘dwarf’ peas seem to grow about 1 metre – higher than they say on the packet. If you don’t get your support in early, the seedlings will flop about, break off and be more likely to get eaten by slugs. You can use ‘pea sticks’ – twigs with lots of small branches. These are good to start with but I don’t find these are strong enough as the peas get taller and if it’s windy Wellington. I use a couple of warratahs banged into the ground at each end of a 1 metre long row with mesh (wire or plastic) for them to climb up using their tendrils. Or you could use a wig-wam of bamboo canes. Either way you’ll need space either side to get access for picking.

Once I’ve planted out my meter row of peas I refill the guttering with potting mix and sow another lot (maybe thre weeks later). This way I get a small number of peas over a longer season. I mulch either side of the rows to avoid having to weed as much and to keep the soil moist. Peas will fix nitrogen in the air into the ground to add fertility to the soil for the crops you plant in the same space afterwards.

Peas, particularly snow peas, need picking regualarly – possibly every day. They’ll continue to produce for longer if you keep picking. Another good reason not to sow too many seeds at once.