You are here: Home / gardening / five ways to use seaweed in your garden 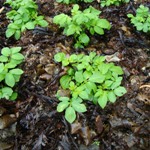 I use any mixture of seaweed types straight off the beach without washing it or chopping it up, including any sand stuck to it. Wellington City Council has some rules about collecting seaweed from the Taputeranga Marine Reserve (Houghton Bay to Red Rocks, including Island and Owhiro Bays). If you’re starting a veggie garden, seaweed will improve your soil and feed your crops.

The very best way to use seaweed is as a mulch around potatoes. It keeps them moist, protects the shoots from the wind, prevents green potatoes and feeds the potatoes. I spread two layers making nests around each set of shoots. One when the shoots are about 20cm high and another about a month later. When you dig the potatoes they come out clean, there are lots of worms and you’ll dig in whatever remains of the seaweed leaving beautiful rich soil for the next crop.

I stuff a porous sack with seaweed at the beginning of the year and leave it to soak in a barrel of rainwater with the lid on. I add a slosh of EM liquid to keep it smelling sweet. When I water I add 1 litre of ‘seaweed tea’ to a 10 litre watering can and top up with rain water.  I top the barrel up with water at the same time. All crops benefit, including seedlings, but particularly strawberries, zucchinis, cucumbers and tomatoes.

Plants can absorb nutrients through their leaves as well as roots so when I’m watering with seaweed tea I make sure I get plenty on the leaves. This also helps with…

Misting with a 1:10 solution of seaweed tea and water not only feeds them but also prevents many fungal infections such as blight, mildew and other moulds. It’s said to be a good preventative for peach leaf curl too but I haven’t tried it.

If you’ve got enough seaweed left, it can always go in the compost. That’s where I put the remains from the sack when I’ve finished making seaweed tea at the end of the Autumn.