You are here: Home / DIY Articles / Gardening with Soul 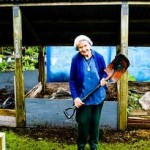 I was moved to tears by the story of Sister Loyola Galvin of the Sisters of Compassion in Island Bay, Wellington. The film ‘gardening with soul‘ covered a year in the life of this dedicated ninety year old gardener. A woman of dignity, grace and humour. Some of the film’s observations of the smallest details were almost painfully intimate. Privacy is one of the many things life in a religious community denies its occupants. It still seems remarkable that the director, Jess Feast, was able to show us such a candid portrait of a very private person. It ranks with my other favourite documentaries of long-lived, passionate and single-minded legends such as ‘Jiro dreams of Sushi‘ and ‘Bill Cunningham New York‘. But they included neither Wellington’s weather nor our tuis nor did they spend quite as much time on the art of making compost.

You measure art by whether it touches people. Sister Loyola and Ms. Feast have certainly done that.