You are here: Home / animals / chickens and eggs / hot chicks

Ten Plymouth Barred Rock chicks to be precise – raised in an incubator as Mabel resolutely refused to go broody. Now fostered by a most diligent and experienced hen who happened to have just brought one of her own little chickies into the world and had room under her ample wings for a few more.  The best way to raise chicks is under a broody chook. Momma Chook looks after turning, temperature and humidity for you. She teaches them to scratch and brings them inside when it rains. 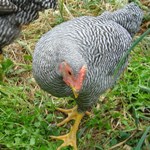 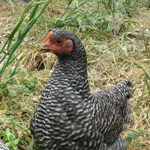 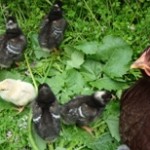 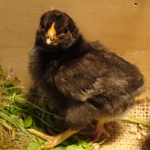 It takes 21 days in an incubator (the same as under a hen) but it’s hard to get the temperature and humidity just right.  I had a good hatch rate thanks to some lovely healthy eggs couriered to me from Taurimu Equine, despite discovering after ten days that one egg had got stuck in the turning mechanism so they hadn’t been turned for at least a week. However I must have run the incubator slightly too hot, as they arrived a day early. A couple of these chicks had curled toes when they were hatched – another result of being too hot. I gave them some specially fabricated ‘chick shoes’ – a small piece of plastic cut from a margarine tub lid taped gently to each foot with medical tape as soon as they were hatched. Not an easy fitting and not the most stylish footwear, but after eight hours I removed them and since then everything seems to have been normal.

The chicks prefer a rough surface under their feet in the brooder – a piece of towelling or sacking rather than newspaper which is rather slippery. As well as chick starter crumble, delivered by the ever helpful Wellington Feed and Saddlery, I give the chicks greens twice a day as it occupies them and helps them learn to forage. Chickweed, puha, grass seed heads and silverbeet are the favourites at the moment. They seem to enjoy the roots and soil around them as much as the leaves.

I’ve recently read Jasper Jones: A Novel and thoroughly enjoyed it – a cross between Kate de Goldi’s delicious The 10PM Question and the classic To Kill a Mockingbird – best to see the film version starring Gregory Peck if you’ve been put off it by being made to read it at school. I’m keen to peruse the new book Organic Vegetable Gardening by Xanthe White too.

tips for raising chicks
home made mayonnaise
dealing with roosters
pullets for sale
« know your onions
leek, bacon and tomato flan »
Logging In...