You are here: Home / gardening / July is for winter harvesting, composting and pruning 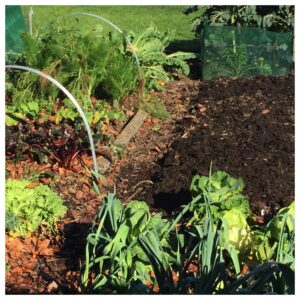 As we empty beds it’s a great time to spread compost. The chilli and capsicum plants I pulled out left space for me to spread the oldest compost I had. I made it from ingredients I collected in October and November. It filled two wheel barrows and covered an area about four metres square.

I’m currently harvesting leeks, coriander, spinach, fennel, cabbage, kale, Chinese (Napa) cabbage, garlic chives, silverbeet, carrots, beetroot and chicory so we’re eating pretty well. I harvested two cauliflower but the remaining four have got frosted so may be beyond redemption. The beds that I empty will be ready for a layer of compost from more recent bins before I plant out the first spring crops in September. Six month old April compost usually goes under summer crops such as cucumbers and zucchinis at the end of October.

I’ve found if I keep compost moist it will rot more quickly and won’t attract rodents. They like warm, dry conditions so I turn it at least once and water if there are dry patches. I’m pruning deciduous fruit but leaving citrus until after the frosts. I mulch the prunings and use them on the paths between beds.