You are here: Home / season / winter / August / Kale is King 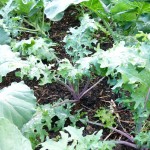 Somehow vegetables are significantly more sexy in other languages. Fancy some cavolo nero bruschetta? Kale on toast just wouldn’t have the same appeal. Grown throughout the world, kale, in all its glorious and delicious forms, is an ancient, robust and nutritious green.

Farmers’ market tables in the colder months are often groaning with a wide array of kale varieties, but growing your own is straight forward and rewarding. Kale is an attractive and cold-hardy vegetable you can harvest all winter. A frost will even enhance its flavour. Related to cabbage and broccoli, kale won’t be troubled by caterpillars during the colder months. It doesn’t form a ‘heart’ like a cabbage so you can pick a leaf or two at a time so a few plants can keep you in greens for many months.

You’ll often see kale seedlings available in garden centres or you can raise your own seedlings if you want to try some of the more unusual varieties. Sow some Italian or Oriental ‘mesclun’ seeds (a mix of salad greens) if you want to try them out raw as ‘baby leaves’ which grow in a month or so. A pot or planter filled, with potting mix, would be fine for these. Or you could sprout some kale ‘microgreens’ in seed trays or shallow containers indoors and have them ready in a fortnight.

Kale needs a fairly rich, well cultivated soil. Sprinkle with lime if you have acid soil. Your kale will enjoy the shot of nitrogen it gets from growing a legume (peas, beans or lupins for example) in the same spot previously. I recommend spacing plants 30cm apart in both directions (16 plants in a 1.2m square). If you’re picking the leaves regularly, when they’re reasonably small and at their most palatable, they won’t be too crowded. Some varieties grow quite tall (more than a metre) so may need some shelter if they’re in a windy spot. Mulching the plants well once they’re established will also help secure them in the ground and feed the soil at the same time. If you do it too early you’ll find the mulch will attract the slugs and you’re your kale seedlings may be nipped in the bud.

The easiest way to use kale is to steam it until tender and serve with a little salt, pepper and butter as a vegetable side dish. Or you could sizzle it in a pan with some garlic and a slurp of olive oil. It makes a delicious extra layer in a lasagne or a mean pasta sauce when wilted with some pesto and topped with some grated cheese. Bubble and squeak usually calls for left-over cabbage and potatoes, but it’s just as good with cooked kale fried up with an onion and a splash of chilli sauce in a pan. You can add raw chopped kale to stews and soups just before serving and allow it to cook in the heat of the liquid. You may need to remove the stems from larger leaves of kale if they’re too tough.

The kale and bread combination however is one of the best. A pizza base spread with a sautéed onion and chopped kale mixture and a sprinkling of strong cheese (Hohepa Vintage Cheddar is a favourite of mine). Or kale on toast – steamed kale of any hue on a slice of toasted sourdough bread rubbed with a cut clove of garlic, a grind of salt and pepper and a drizzle of olive oil. So startlingly delicious you won’t even notice the good it’s doing you.