You are here: Home / season / spring / September / know your onions 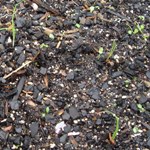 I weeded the onions I sowed at the beginning of August. They are still only tiny seedlings eight weeks later thanks to some erratic temperatures. The ones I sowed indoors at the beginning of September are about the same size. I’m sowing some more outside now and I suspect they’ll end up all being ready together. There are lots of onions to try. If you want quick results then go for spring onions and welsh onions (a bigger bunching onion). Sow four or five seeds in one spot so you’ll get a bunch of onions to pull together. For salads there are red and white onions, whilst the brown ones will store well through the winter. Sow them where you grew neither leeks nor onions last year. They work well sown straight in the soil or in pots to be transplanted. They are relatively untroubled by pests and diseases. They do need weeding early on but mulching them once they are big enough will help cut down on weeding later.

We had a late frost last week that set back some of the potatoes. The ones I’d mulched with seaweed didn’t seem to be affected – perhaps it gives them some shelter as well as giving them added nutrients, supressing weeds and keeping them moist (not a problem at the moment). I gave the broad beans some Japanese-style support and when they get even taller I’ll pinch out the tops to keep them from getting blown over. Even dwarf varieties are vulnerable in Wellington’s November winds.

The leeks are still a winter staple so we had slow-cooked pheasant with leeks and prunes. I also made za’atar as an alternative to the dukkah spice mix I normally make.

The Kitchen Garden will be open to the public as part of the Ohariu Valley Garden Ramble this year on Sunday 1 November 2009, 10am – 4pm.

If you’re quick you can still enter the draw to win tickets to the Wellington home and garden show by signing up for free with home harvest.