You are here: Home / DIY Articles / later can be better… 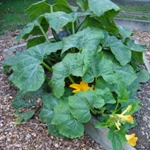 I’m always trying to start things early and get ahead of myself in the garden. Nature however does little to cooperate. The reassuring thing is that if you get behind, you may well have success. I sowed a couple of extra zucchini seeds and some dwarf beans in early January. I’m now picking from those plants, while all the others have succumbed to mildew and the effects of the equinoxial gales. The zucchini that I planted in a tyre is doing particularly well. My tyre tower potatoes were a dismal failure, but putting a single tyre on top of a raised bed, filling it with two barrows of compost and sowing a yellow zucchini plant into it has been a great success. I suspect it’s the fact that it gets more than its fair share of water, has pure compost in which to grow and has its roots warmed by the sun. Also the fruits are easier to find and pick.

The new catalogue is out for Edible Garden – the place to go for all your fruit trees, but you need to order ahead and they won’t be delivered until they’re dormant (August / September time).

If you’ve still got some summer crops, try making some autumn chutney or a bean and rocket salad. The mini pumpkins are ready for picking so there will be some mini pumpkin soup this week. If you enjoy food and cooking, the Wellington Food Show is on at the Stadium 14-16 May 2010. If you’re more interested in live poultry, the North Island Poultry and Pigeon Club holds its annual show 8 and 9 May 2010 at Riverstone Recreation Centre Upper Hutt.