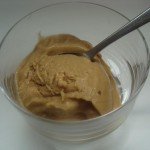 A rare flavour to find in boughten ice cream, I thought I’d have a try at making my own liquorice ice cream as I’ve had the pleasure of borrowing an ice cream maker recently. It was decadent and delicious. With only three ingredients it’s pretty simple too and a very strong liquorice flavour. I suspect it would be quite acceptable without the churning (technically then a ‘parfait’). Also time to plant lots of liquorice herbs such as fennel, tarragon and dill.

Heat the licorice and milk in a pan over a very low heat, stirring all the time. When it’s nearly dissolved, remove from the heat and blitz with a hand blender to speed up the process and introduce as much air into the mixture as possible.  Whip the cream and add the cooled liquorice mixture, folding gently to combine. Put into an icecream maker and churn. Put into an ice cream container and freeze for a few more hours to firm it up. Allow to stand for half an hour or so at room temperature before serving.

creative carrots
rhubarb and almond jalousie
around the world in twenty female singer-songwriters
protection for seed raising, seedlings and crops
« herbalicious
Not quite Soreen fruity malt loaf »
Logging In...