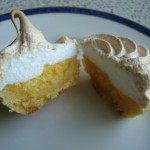 Having made lemon curd, I was looking for a way to use it in a dessert. Cafe Medici in Martinborough used to serve mini lemon curd tartlets that were worth the trip over the hill from Wellington in themselves. The addition of a meringue topping was satisfying because it increased their visual appeal, it used up the two orphaned egg whites from the pastry and it made them easier to transport by sealing in the curd. Makes 24 mini pies.

Sift the flour into a mixing bowl or pulse in a food processor. Add the butter and sugar. Rub in with your finger tips or pulse until the texture of fine breadcrumbs. Add the egg yolks and vanilla essence and bring together into a ball. Wrap in cling film and chill in the fridge for an hour. Place a piece of baking paper on the bench. Lay the dough on the paper and cover with a piece of cling film. Roll out the pastry thinly between the cling film and paper. Cut out 5cm circles and use to line mini muffin tins. Re-roll the trimmings to use up the pastry. Prick the bases of each case with a fork. Chill in the fridge another hour. Bake in a pre-heated oven at 180 degrees C for about 10 minutes.

Whisk the egg whites until stiff. Gradually add the sugar and beat until glossy. Check the sugar is dissolved by rubbing the mixture between your finger and thumb.Pile into a piping bag.

Fill each pastry case with half a teaspoon of lemon curd. Don’t over fill or they’ll bubble over when you cook the meringue. Pipe a swirl of meringue on the top of each, sealing against the pastry case. Bake in the oven for 15-20 minutes at 180 degrees C until lightly browned. The meringue will still be soft inside but crisp outside.