You are here: Home / recipes / lusaka 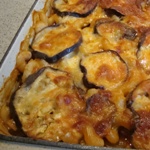 A cross between moussaka and lasagne. We make bolognese sauce in large quantities, sometimes in the slow cooker, and freeze in portions. If you want it gluten free it’s great without the pasta. Serves four.

one and a half cups bolognese sauce

one medium eggplant (aubergine) or two zucchini (courgettes), sliced about half a centimetre thick

one cup cooked pasta or three sheets of lasagne (optional)

large handful (more if you don’t use the pasta) of silverbeet (chard) or spinach leaves, finely shredded

one cup of thick, white sauce