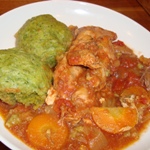 This slow cooked pheasant casserole would work just as well with chicken or rabbit. Sweet chestnuts are a traditional accompaniment to pheasant as they both appear at the same time of year. Pheasant is very lean so works better casseroled rather than roasted in my opinion. One good sized pheasant would serve four like this, accompanied with some steamed winter cabbage. Not entirely necessary as you’ve got your greens in the dumplings.

One pheasant, jointed, with or without skin

One can of chopped tomatoes

Salt and pepper and a couple of sprigs of fresh thyme.

Quarter of a cup of milk, more or less

Place the oil in the slow cooker. Add the onions and carrots. Top with the pheasant joints. Pour over the tomatoes, rinse the can with a little water and add that too. Season with salt and pepper. Add the thyme. Switch to low and cook for 4-5 hours.

About an hour before serving, turn the slow cooker to high. Put the parsley, chestnut and butter in a food processor. Pulse to mix. Sift together the flour and baking powder into a bowl. Add the chestnut mixture and beaten egg to the bowl. Mix together, adding the milk a little at a time to form a soft dough. Using a couple of spoons, make the dough into six to eight dumplings and place on the top of the casserole in the slow cooker. Space them apart as they do increase in size as they cook. Cook for another half hour or so, until the dumplings are risen and cooked.