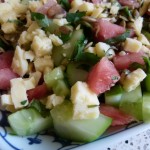 Watermelons are plentiful at the moment and the cucumbers keep on coming so I made this variation of a cucumber salad this evening to accompany some fish. If you want a more sophisticated version, peel the cucumber and use a melon baller to get spheres of both cucumber and melon flesh. For weekday suppers this version is fancy enough. I didn’t feel this needed a dressing as it was already juicy and had sweetness from the melon, fat from the cheese and flavour from the mint. Perhaps a squeeze of lemon would have added some acidity.

One cucumber, cubed (my favourite varieties are Tasty Queen and Diva)
Segment of watermelon, de-seeded and cubed (similar quantity to the cucumber)
Couple of tablespoons of pumpkin seeds, toasted (put in the oven on a baking tray for about five minutes, turning once)
About 50g cheese, crumbled or grated (feta or vintage cheddar would be my pick)
Leaves of a couple of sprigs of mint, finely chopped

Put the cucumber in a bowl and sprinkle with a teaspoon of salt. Mix well then leave to drain in a sieve over the bowl for about half an hour. Mix the drained cucumber and watermelon, sprinkle with the cheese, pumpkin seeds and mint.

winter Thai beef salad with creamy coconut dressing
what do I do with my beetroot?
chickpea and kumara salad
nearly nicoise
« growing your own vegetables made easy
learn to garden courses – Autumn workshops »
Logging In...