You are here: Home / DIY Articles / moving an asparagus bed 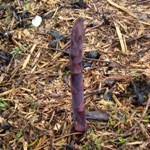 I grew asparagus from seed  – waiting the required three years before picking the first, tender spears. It was delicious and some of it was purple. But most of the time it was scruffy and in the way. The ferns flopped everywhere, blocked the paths and shaded the rest of the garden. It was also in one of the most useful and accessible beds in the garden. When I dug up the asparagus it proved to have roots similar to those of an agapanthus with a tenacious grip on the soil. I thought I’d prepared the bed very well but the soil was very heavy clay underneath, despite mulching regularly with seaweed. I got to the stage where I was just glad to winkle the crowns out of the mud. If they were still viable that was a bonus. At least they were dormant. At least it gave the bed a good digging in the process.

The crowns are now relocated in a somewhat less conveniently situated raised bed, with lots of compost and mulch and in good sunshine. Will they survive? Time will tell.

time to sow your seeds
New year, new spinach
Growing great greens
Successful salads - a leaf, a root and a fruit
« the first signs of spring
the wedding formula »
Logging In...