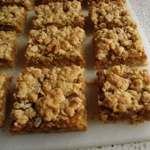 Save Print
Prep time
20 mins
Cook time
30 mins
Total time
50 mins
I used to detest the taste of cardamon - particularly when I crunched a whole one in a curry. Just as I've acquired the taste for coriander, cardamon has grown on me too. My friend from Baghdad adds the seeds from a couple of cardamon pods to a pot of tea which then release their beautiful aroma into the brew. It seemed to be the perfect Persian spice for these bars. I use a silicon baking tray about 23cm square. If you use a baking tin, line it with baking paper. Makes about 16 good sized squares.
Author: Rachel
Recipe type: Baking
Serves: 16 generous squares
Ingredients
Instructions
3.5.3208