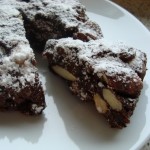 When I first came to Wellington I had a job interview sitting outside Astoria cafe. I chose to eat a sliver of panforte, dusted with icing sugar, something I’d never tried before. It was a poor choice as I nearly choked by inhaling the sugar and the remainder of it was blown down the front of my dark suit. I clearly dealt with these challenges with aplomb however as I was offered the job. Here’s my version of the sticky, Italian dessert cake which I  made into two 12 cm diameter cakes – one to keep and one to give away. I didn’t have a small enough baking tin but used the tin in which my cookie cutters came, lined with baking paper. I think the free form version worked just as well, cooked on a baking tray.

Pre-heat the oven to 180 degrees C and while it’s heating up, toast the nuts on a baking sheet for 10 – 15 minutes, watching carefully and turning a couple of times so they don’t burn. Sift together the flour, spices and cocoa into a large mixing bowl. Stir in the nuts, dried fruit, lemon and orange juices and lemon zest. Put the sugar and honey in a small pan on a low heat and stir until the the sugar dissolves. Boil gently until it reaches 115 degrees C on a candy thermometer (a couple of minutes). Quickly pour the syrup into the bowl and stir well. Divide the mixture into two and form two 12cm diameter cakes on baking paper lined baking sheets or make one cake by pressing all the mixture into a 19cm diameter baking-paper lined tin. Bake for 25-30 minutes. Dust with icing sugar or cocoa to serve.