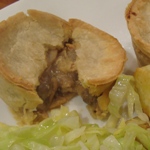 Pies make a small amount of meat go a long way in a delicious and portable reincarnation. Short crust pastry is quick and easy to make yourself, but you could substitute boughten puff pastry if you prefer. You can use any left-over meat from a roast such as chicken, lamb or beef. These pies freeze well and reheat, once de-frosted, in about 15 minutes in a hot oven. Makes eight to ten pies, depending on size.

Sift the flour into a mixing bowl. Rub the butter into the flour with your fingertips, until the mixture resembles fine breadcrumbs. Sprinkle over three tablespoons of cold water. Cut through the mixture with a spatula to bring it together into an unsticky dough. If you can’t squeeze it together easily with your hands, add a little more water. Wrap the dough in cling film and leave it in the fridge for at least half an hour.

Half a cup of stock or left over gravy

Melt the butter in a frying pan and saute the onions until softened and starting to brown over a medium heat. Add the mushrooms and continue cooking until golden at the edges.  Add the meat to the pan. Mix the cornflour to a smooth cream with a tablespoon of cold milk or water. Mix into the stock and add to the pan, stirring until the sauce simmers and thickens. You want a thick sauce so you may need to adjust it with more liquid or a little more cornflour paste. Season with salt and pepper to taste. Remove from the heat.

Pre-heat the oven to 200 degrees C. Cut the pastry dough in half and leave the remainder wrapped in the fridge. Roll out the pastry using a little extra flour to prevent sticking. Grease nine or ten oven-proof ramekin dishes.  Cut a lid, a base and a curved piece for the sides from the pastry sheet to fit the dish. Put the base in the ramekin and seal the sides to the base with a little water.  Fill no more than two-thirds full with meat filling and then seal the lid with a little more water. Make a small hole in the top of each pie with the point of a knife to let the steam escape. Place on a baking sheet (in case they bubble over) and bake for 30 minutes, until golden brown. Allow to rest for five minutes before removing them from their dishes.

If you don’t have suitable dishes or want a quicker alternative, you could make pasties by cutting 15cm circles of pastry and folding them over the filling, again sealing the edges of the semi circle with water.  Place the pasties on a greased baking sheet and bake for about 25 minutes.

pheasant and mozzarella roulades
pheasant with prunes, leeks and bacon
hare and spinach curry
venison and zucchini meatloaf
« silverbeet, feta and pine nut triangles
the best thing about a roast is… »
Logging In...