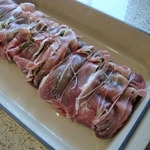 A hunting trip endowed us with four half venison fillets in the freezer, all slightly less than a kilo in weight. I smeared this one in pesto and wrapped it in proscuitto and it was a generous main course for five, accompanied by new potatoes, vegetables and salad. A beef eye fillet would be a good alternative. I’ve used my hare wellington recipe for a couple of venison rump steaks.

Half a portion of basil, coriander or rocket pesto

Pre-heat the oven to 220 degrees C. Lay out piece of plastic wrap. Separate the slices of proscuitto and place them out on the wrap, overlapping slightly, in a rectangle the length by twice the width of the meat. Spread half the pesto on top of the meat and lay it , pesto side down, on the proscuitto. Spread the remaining pesto on the meat. Wrap the proscuitto over the meat. Tie up with cotton string.  Season with salt and pepper.

Grease a roasting dish with olive oil and put the meat in the dish in the oven. After fifteen minutes reduce the heat to 180 degrees C. Cook for 25 minutes. Remove from the oven and cover the meat in the roasting dish with a tent of aluminium foil. Allow to rest for about 15 minutes in a warm place. Thicken the juices in the pan with a teaspoon of cornflour dissolved in a tablespoon of milk. Remove the string and slice thickly to serve.