You are here: Home / gardening / Slow compost progress – that’s fallen leaves for you

At the end of June I had two big compost bins (350 litres each) full of fallen leaves from May (ginko) and June (copper beech). I’d included all the other garden and kitchen waste from those months. I expected that by now, a month later, they would have decomposed enough to fit into one bin. I’ve turned them into a 350 litre and 270 litre bin to help speed up decomposition and to see what’s slowing things down. They’re wet enough but it’s been cold and the ginko leaves in particular are compacted enough to exclude air. They have a whiff of anaerobic decomposition about them. There’s not much fresh material (green weeds and lawn clippings primarily) to feed the bacteria so although there’s some fungal and worm activity, that’s not getting things going very quickly. I could have added some mulched prunings to add some ‘structure’ to the mix and retain the air between the leaves, but I prefer to use that as a mulch on paths between the beds. I’m still hopeful I’ll have combined these two bins into a single green bin full of slowly rotted compost into which to plant some summer vegetable plants at the end of October (two months from now) 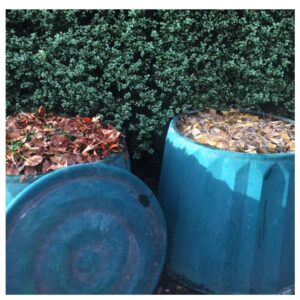 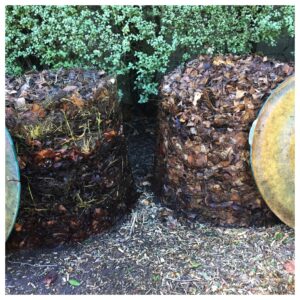 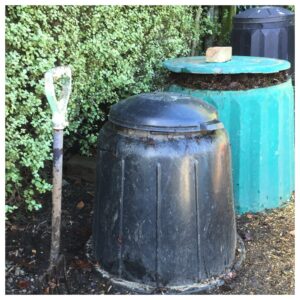 May and June compost turned 1 August