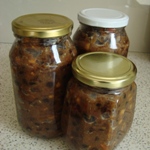 The reason to cook mincemeat is to stop the juice from the fruit fermenting so it will keep longer. The slow cooker is ideal as it doesn’t allow the mixture to burn. You do need a large one for this quantity though (5 or 6 litre). I used mine on low and checked how hot it was getting using a candy thermometer – it reached about 150 degrees C at its hottest. Makes about five 400g jars. Use to make your own mince pies, mincemeat tart or mincemeat ice cream (whip half a litre of cream to soft peaks, stir in gently to a half a litre of ready made custard and stir through a jar of mincemeat, freeze).

zest and juice from two oranges and two lemons

90ml brandy (I didn’t have any so substituted gin)

Mix all the ingredients, except the brandy, together in a large non-metallic bowl. Leave covered for 12 hours. Pour into the slow cooker and cook on ‘low’ for four hours, stirring hourly. Check the temperature with a sugar thermometer if you have one – aim for about 150 degrees C. Allow to cool, stir in the brandy and bottle in sterilised jars.