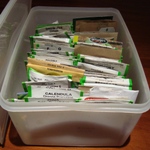 Seeds keep well for at least a couple of years, often much longer. They need a cool, consistent temperature and above all, need to be dry. Seal them in an airtight container (not a tin or cardboard box) and add some silica gel dessicant. Don’t let the packets get damp. I have a plastic index card system in a plastic food storage box where I keep my seeds. I even put them in an icecream tub when I take packets outside to sow.

It’s a good time of year to get out your seed catalogues and start planning for the new season. It’s worth repeating failures, at least once, as they may be great successes another year. I tried the pumpkin ‘hooligan‘ for the first time this year. It yielded only two pumpkins on two plants – included in my baked pumpkin medley, but I’ll give it another chance. Jack be Little was by far the most productive and grew well vertically over a fence. The five new things I’ll try next year are:

1 Radish Minowase Long White – round red and black radishes have been a success, now I’ll try long, white ones.

3 Caper bush – difficult to get started but I get through a huge number of capers.

4 Squash Hubbard Chicago Warted – how could you resist that name?