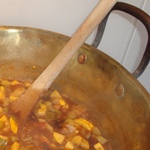 This chutney is an easy way to preserve not so perfect summer crops in pretty much any combination available. Just keep the same proportions of fruit, vinegar and sugar so it keeps well.  Fill some attractive jars, stick on an attractive label and you’ve got the perfect gift. Keep at least a fortnight, ideally a couple of months before eating. It’s a useful addition to stews to add sweetness, fruitiness, spice and acidity all in one spoonful. Makes about three litres depending on how long you boil it – six to eight medium jars.

1kg apples, pears or tomatillos (or a mixture)

500g dried fruit (sultanas, dates, prunes, apricots or figs in any combination chopped up to the size of a sultana)

one fresh red chilli or a couple of dried chillies, finely chopped

one teaspoon each of salt and ground ginger

Chop the zucchini or marrow into 1cm cubes. If the marrows are large, remove the skin and seeds from them first too. Skin and de-seed the pumpkin and chop into 1cm cubes. Scald the tomatoes in boiling water, peel and chop roughly. Stone and chop the plums. Remove the cores from the apples or pears, the stalks from the tomatillos and dice. Skin and chop the onions finely. Put everything into a really big, heavy-bottomed pan. Bring to the boil stirring and simmer for 2-3 hours uncovered. Stir regularly to prevent it sticking. Seal into sterilised jars* while chutney and jars are still warm. Wait until they’re completely cold before labelling.

*Run the jars though the dishwasher or put in an oven for 10 minutes at 120 degrees C. Put the lids in a pan of boiling water and simmer for a few minutes. Do the same with any jugs and funnels you use to fill the bottles.