You are here: Home / season / winter / August / the first signs of spring

The first shoots of garlic are coming through at last (planted 1 June). No sign of the elephant garlic, sown at the same time, yet. There’s even the tip of an asparagus spear appearing above the mulch.

The broad beans are doing well too. The seeds I sowed mid-May managed to avoid getting eaten by mice or rotting in the ground. I’ve mulched them with a fine mulch from my shredder, to reduce weeding. I’ll do the same with the garlic once all the shoots are through. 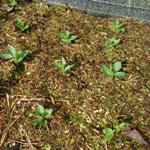 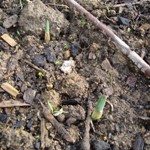 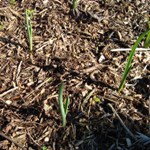 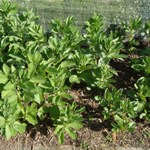 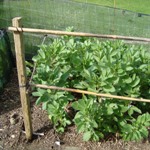 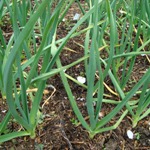 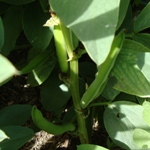 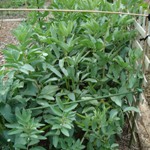 I knew the chooks were laying with the days starting to lengthen but I had to confine them to their run for three days before they decided to lay an egg in the right place. They’ve been roaming around freely and no doubt have stashes of eggs in all sort of places. Rodriguez the rooster is looking very fine and has started hopping over the fence into the vegetable garden. A habit I am keen to nip in the bud and another reason to get them out of the habit of roaming so far.

Rhubarb and silverbeet are staples at the moment so I’ve made silverbeet, feta and pine nut triangles and rhubarb gingerbread.