You are here: Home / DIY Articles / The Great Beauty 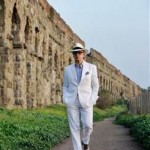 Rome was the star of ‘The Great Beauty‘. Rome’s wealthy were just actors on the stage and the only ones for whom I cared even a little were Jep (pictured), the aging playboy, and his tiny editor. The giraffe and the flamingos were surprising and far more so for the backdrop of the ancient city. Nudity and drugs, yes, glamour, certainly and beautiful tailoring  in Jep’s jackets. But not a story with a crisis and resolution to hold my attention and affection for over two hours, despite the spectacle.

Dressing up
colourful carrots - because you can
Autumn container carrots
Kūmara (sweet potato) and kidney bean chilli
« Romeo and Juliet: a love song
Ernest and Celestine »
Logging In...