You are here: Home / season / winter / August / The onion family 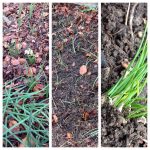 Onions are a pretty tolerant and versatile crop. I don’t yet grow all the onions I use but as they keep well, in time I think that’s a reasonable goal. If you don’t have much space then I’d prioritise red and white (or even yellow) ‘salad onions’ over brown onions even though they don’t generally keep as well. And if they don’t appeal then shallots, garlic, elephant garlic, Welsh onions, Spring onions and chives may still earn a place in your garden, even if it’s just a container.

I’ve just planted a metre squared of red (California red) and brown (Pukekohe long keeper) onion seedlings (64 seedlings 12.5cm apart in each direction). I’d previously planted some shallot sets I’d saved from last year and I bought a few more shallot seedlings (Ambition) as some varieties seem to go to seed much less than others. I planted some Spring onion seedlings in groups of three – because that’s what’s needed on a pizza (16 bunches in total for four months of once-a-week pizza topping, same spacing as the onions).

I divided up some clumps of chives that are just reemerging after winter. They hadn’t done well where they were last year as I hadn’t watered them adequately so I’ve added them to ‘the onion bed’ where they’ll get watered with the onions. I can never have too many chives it seems.

Seven ways to stop the panic of a glut
you're better with a plan, even if you don't stick to it
seven tips for getting more eggs from your chickens
roasted roots (and a fruit)
« Landrover biscuits
Pies, glorious pies. »
Logging In...