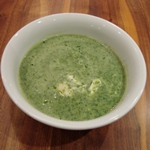 Watercress soup is a vibrant shade of green if you don’t overcook the watercress. I think it benefits from a rich, meaty stock-base. I simmered left-over bones and gravy of a shoulder of hogget for a few hours just covered in water in the slow cooker. I used half the strained liquid as a stock and froze the other half for later. This also gave the soup a pleasant, slightly minty, flavour. Vegetarians would probably disagree and substitute a well-made vegetable stock. You could use spinach or silverbeet if you don’t have watercress.

Melt the butter gently in a large pan. cook the onion or garlic chives until soft but not coloured. Add the potato and stock and bring to the boil. Wash the watercress well and remove any tough stems. Chop roughly and add to the pan. Return to the boil and simmer for a minute. Turn off the heat and blend with a stick blender or in a food processor. Taste and season with salt, pepper and freshly-grated nutmeg to taste. Reheat without boiling and serve garnished with cream and chives. Float a poached or soft-boiled egg in the centre of each bowl to make lunch. Serves two.